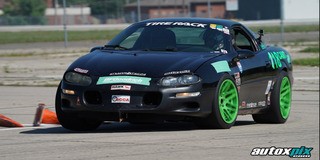 This past weekend, 126 competitors converged on the Grissom Aeroplex in Peru, IN. for the annual Tire Rack SCCA CAM Challenge East. While the focus of the event was on the 94 CAM drivers in the three classes: Traditional, Sport and Contemporary, an additional 32 drivers partook in the non-CAM index class. All competitors got three runs on Saturday morning and another three runs in the afternoon. The best morning run and the best afternoon run were then combined to determine the winners in each class.

Saturday morning, Mike Losert and Sam Strano started out with the fastest runs in CAM-S, but Jimmy Vajdak surged to the lead on his final run of the morning and continued that push into the afternoon. Vajdak took the class win by 0.040 second over Strano with another 0.228 second back to Losert in 3rd.

The 48-driver CAM-T class was dominated by Devin Taylor. While his lead was only 0.101 second over Danny Popp after morning runs, he widened his lead to 0.994 second to take the class win. Behind him, it was a tight race for the podium with Popp taking second by just 0.093 second over Donny Freise.

Randy Adkins took a strong lead in the CAM-C morning runs with James Thomas and Keith Lamming in tow. In the afternoon, he stretched his lead by about a tenth to take the win. Behind him, both Lamming and Thomas found time on their final runs giving it all they had. Lamming took over the second position with 0.995 second over Thomas. It was almost an all-Mustang party in the trophies, only spoiled by Lamming in his Chevrolet Camaro.

In the Indexed Worker Class, Aaron Miller led from start to finish in commanding fashion, taking the win by over two seconds. The podium was completed by Ron McManus and Tim Sholar.

Sunday morning started with qualifying for the CAM Challenge Shootouts. The top eight drivers from CAM-S and CAM-C and top 16 from CAM-T all qualified for Shootouts. Sam Strano was the top qualifier from CAM-S. He made it all the way to the final round before being eliminated by James Elliott by just 0.021 second. Elliott moved on to the Challenge Final against CAM-C’s Don Slevin and Devin Taylor from CAM-T. With less than 0.500 second separating the final three drivers, Taylor put a cap on his perfect weekend by taking the win. Elliott finished second with Slevin in third.